Japanese horror movies are well known for their lasting impact that leaves a mark in your mind. From the early traumas of your childhood by watching The Ring and The Grudge, you are now a strong adult and back for more trauma.

For this reason, movies such as Ringu/The Ring and Ju-On/The Grudge will not be included.

If you have not seen these films, watch them to prepare yourself for this list that will dig deeper into your inner fears you never thought you have. 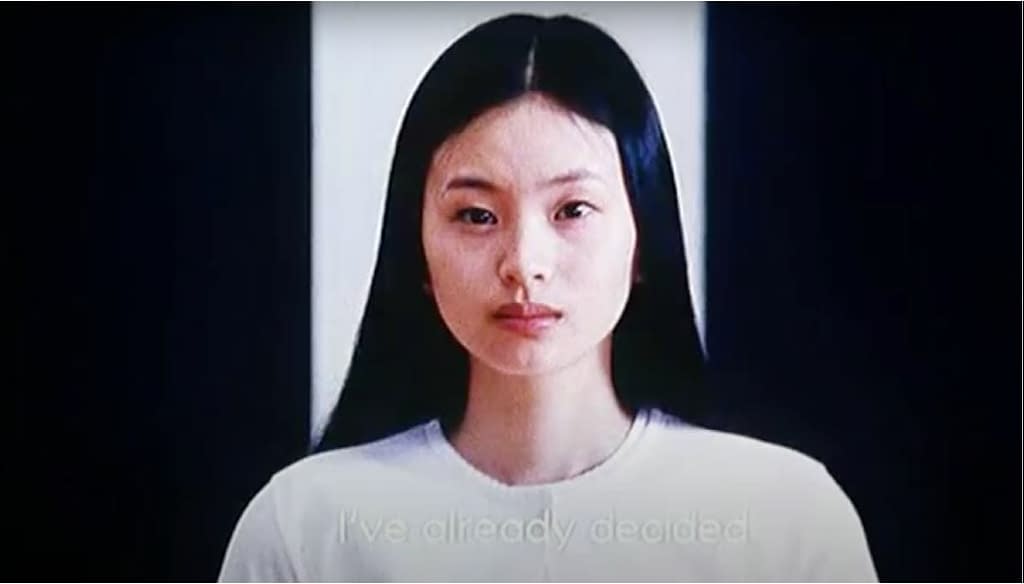 Directed by Takashi Miike, The Audition is one of his best-known films internationally.

Despite the movie released in 1991, this film takes a closer look at what modern online dating looks like now, more than ever.

We start with a protagonist who has conducted a fake movie audition to find the love of his life.

A simple act of deception but with no evil intention. Just in luck, he finds the woman he is looking for.

The story builds up that will put your guard down and empathize with the protagonist; his angelic love interest, however, is not what she seems.

The movie gives a deceitful atmosphere of blooming love and hope, but the prolonged twisted climax hits the dark reality of dating.

A movie that will be at the back of your mind the next time you go on a date or before you swipe right on your tinder.

From the same creator of Ju-On/The Grudge comes another film by Takashi Shimizu.

An underrated film that deserves more recognition from its psychological horror and its perception of deteriorating madness.

The story starts with a curious cameraman named Masuoka who is fascinated with the concept of fear.

After he sees footage of a man who committed suicide in the subway, he became desperate to find answers and finds more than what he bargained for.

As he discovers an underworld beneath the subway of Tokyo, he finds a strange naked girl chained in a cave and takes her to his apartment. Masuoka later discovers an inhuman behavior in the woman.

The film conveys a strange vibe and perception of one mans madness and the dark world.

The mystery and the surprising twist, and in the end, leaves the audience on edge.

For the majority, the solution is to jump into a rabbit hole to speculate the ending.

From the author and director of Ringu; Hideo Nakata and Koji Suzuki.

This film focuses on the emotional side of the protagonist.

Yoshimi a single mother, fighting for a full custody of her daughter, who is struggling.

A movie that perfectly depicts the struggle of motherhood as a single parent.

Yoshimi juggles tasks to provide for her daughter and work a full-time job, but her life is unfortunate

Nevertheless, for Yoshimi, she is off for a fresh start with her daughter. This somehow gone from bad to worst as the creepy apartment, they recently moved into is haunted by a ghost.

This horror movie draws away from the average cursed/vengeful ghost.

It also goes beyond the typical gore horror genres as it took the horror on a heart-rending psychological level.

A good combination with disturbing elements and a jump scare.

Towards the end of the movie, you will be emotionally attached to the character, and shedding a few tears in the end scene is expected.

An ending that will take you by surprise. This is a staggering film that will leave a mark.

Where to watch: IMDB 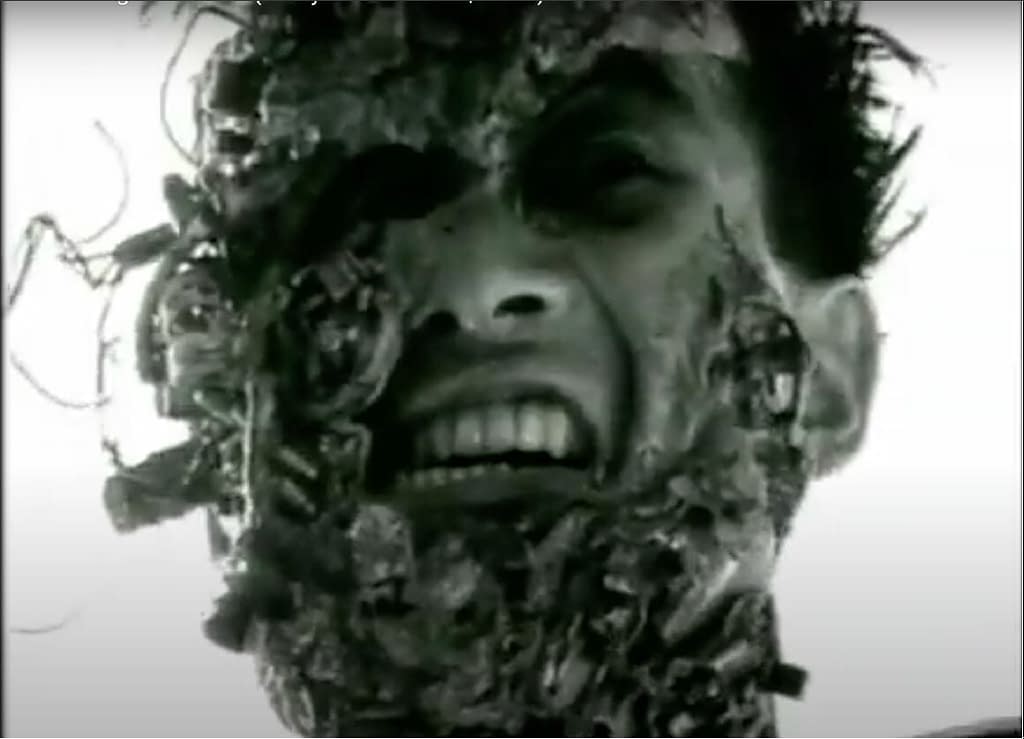 This 1989 low-budget horror cult classic still screams to this day. Directed by Shinya Tsukamoto comes to lead a cyberpunk horror film that is so mechanical in all ways, the grease of this movie will stick with you for days.

The movie has a unique storytelling approach with hardly any dialogues adds tension and a dark ambiance throughout the film.

The story centers around a businessman who cursed and excruciatingly morphs into a metallic machine. The gruesome visuals of tearing flesh and sadistic tortures earned this movie its place that will scar your mind.

The theme of losing one’s control over their own body and health is one of the truest horrors we can face as humans. The theme digs deeper into realizing not having one reality, no control over aging, and despite advancements, death has no cure to this day.

With that in mind, this film plays around and eats with that fear of having no control over your own body.

Moreover, the inclusion of metal fetishism and gore, and you have yourself a visual nightmare.

This film’s premise is about a horror mystery that narrates around a detective name Takabe as he investigates a series of strange cases of murders.

Puzzled by different killers that carve the same symbol into their victims, His sanity crumbles as he digs deeper into these cases.

The movie illustrates the core of the mind and its natural violent tendencies. To unlock this mental desire (that everyone has) is what the audience and the protagonist in the film will try to understand. It will leave you feeling confused and mentally disturbed.

There is a lack of gore and jump scare, yet achieving to portray mysterious and sinister force present is what made this movie a brilliant masterpiece.

Directed by Kiyoshi Kurosawa, who is well known to give a trademark of questioning one’s identity and one’s role in society. You know you’re off for a good film that drills the mind and examine your own existence.

Is a documentary-style horror film directed by Koji Shiraishi, the director of Sadako vs. Kayako.

A paranormal researcher Masamu Kobayashi explores a small town to investigate strange events for a Documentary.

His involvement escalated into getting tangled into the ancient village rituals, psychic prodigies, and demonic entities.

The narration by the use of VHS footage is what made this film look authentic and believable.

Although this style has been done before, the presentation of this mix of media, along with incorporating interviews and the demonic ambiance, made this perspective unnerving cinematography.

The film delves into a plague of suicide across Japan. From the victim’s perspective, committing suicide is an exciting getaway.

This disturbing ingredient makes the audience questioning the sanity of every individual within this movie.

A detective named Kuroda examines this strange behavior after 54 students have committed suicide. What is peculiar is with excitement and no restraint, they have been witnessed jumping into an oncoming train.

As events continue throughout the film, victims’ presentation passionately diving into their deaths made this film sinister and gruesome.

It gives an atmosphere that there is an invisible entity that is driving everyone mad.

For years, viewers have created theories to crack the symbolism and the meaning of this film. 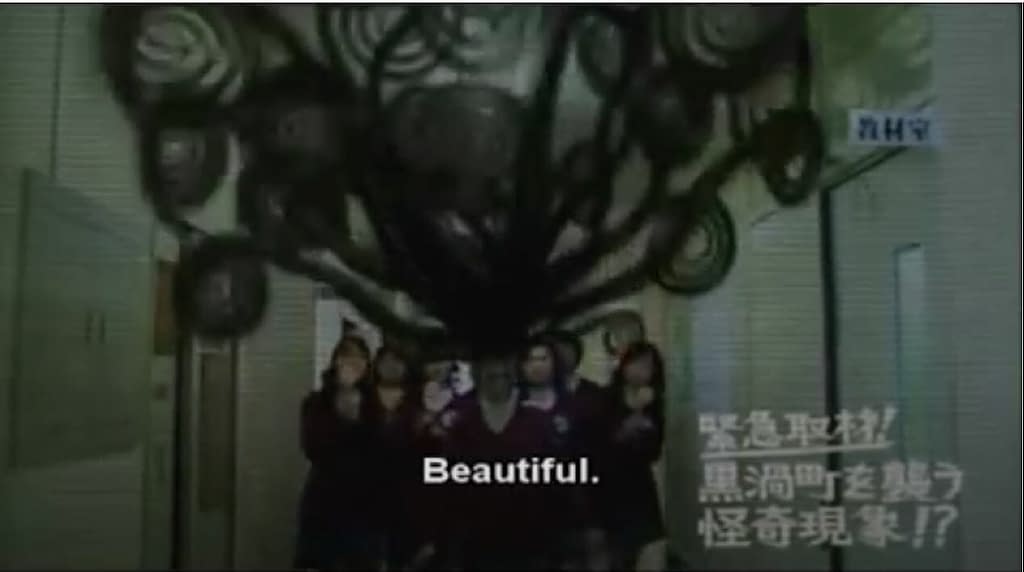 Based on the horror manga by Junji Ito, also known as Uzumaki. He is recognized by his surreal imagery and phobia-triggering topics, making him on the top of Japanese horror manga creators.

The movie tells the story of a cursed town haunted by a mysterious entity of spirals.

Though at first, this symbol does not convey a threat.

That is soon about to change as insanity as it comes to people in this town once they are drawn into the spiral to the point of worship or even trying to commit suicide!

The narration then later shows how spirals live within ourselves and cannot be avoided – our fingerprints, earlobes, hair whorls, and more.

The brilliance of helplessness of the protagonist to avoid the inevitable doom.

Fear of the spiral triggers a phobia you didn’t know you have until after watching this film.

Now, Let’s move on to the top 2 Japanese Horror films you’ve never heard of that will complete the real horror of reality and insanity.

From the director Masayuki Ochiai who brought you Ju-On and Shutter.

This movie comes to a horror genre close to our time now.

A mysterious contagious illness hit a small hospital with low on staff and with not enough supplies. Sounds familiar? However, this is not your average zombie movie or pandemic. This one lingers on infecting the subconscious mind. The hallucinations and the insanity of victims falling into this illness and having no known resolution.

The film remains a psychological horror that is open for interpretation. The touch of green goo that represents the infection also creates an eerie territory within the horror. There are small details that depict later down the movie.

These are gems you need to keep an eye on throughout, though.

Out of the film.
Trailer: Click Here
Where to watch: IMDb, Walmart(DVD), Justdial/Youtube
Once you have seen the movies listed here and your visuals and mind have been scarred.
You are now ready for the last one that will complete the mental therapy you asked for.

A 1920’s silent film that takes you into the world of Asylum. Silent films are not everyone’s cup of tea. However, this classic horror illustrates the maddening horrors and the mind of people with mental health conditions.

The film shows a Janitor who took the job at an insane Asylum to free his wife.

As he is exposed to the Asylum’s deteriorating living conditions, the cinematography conveys the disturbing imagery, expression, environment, and hierarchy within the facility and the mind of an insane person that was perfectly conveyed even without words.

These experts explained how the film fits the portrayal of mental illness with cinematography.

The incomprehensible horrors of this film are the visuals of your fever nightmare that your brain deletes the next day.

Trailer: Click Here
Where to watch: Amazon(DVD/Blueray), IMDb, Youtube
To Summarize it all. There is no greater horror than our own minds. Now add disturbing
visuals and you got yourself a prescription list of Japanese films that will put you into
therapy.